The Pixel and Pixel XL will be available from Verizon and unlocked through the Google Store, with pre-orders starting today. They’ll be compatible with all four major U.S. carriers, too, as well as Project Fi. Pricing starts at $649 for the base model Pixel, or you can pay monthly for $27/month.

Google says the Pixel and Pixel XL will be available in the U.S., Australia, Canada, Germany and the UK. It’ll also be available in India, with pre-orders starting October 13.

Behold: These are the Google Pixel accessories

Right off the bat, it looks like we have a colorful array of cases on display that come in red, orange, green, blue, black and clear. The color cases will cost you $35, but the clear ones are only $30.

If minimalism isn’t your bag, then Google is also offering some “Live” cases that offer some more flare. The Artworks line of Live Cases adds a creative flair to the back of your device in a broad range of available styles that stretch from album covers to starry nebulae.

If choosing someone else’s design isn’t custom enough, then you can opt for the Photos Live Cases, which let you fully customize your device’s appearance with your own photographs. Additionally, Places Live lets you sport your favorite locale on your handset through the magic of Google Maps. All Live Cases go for $40. 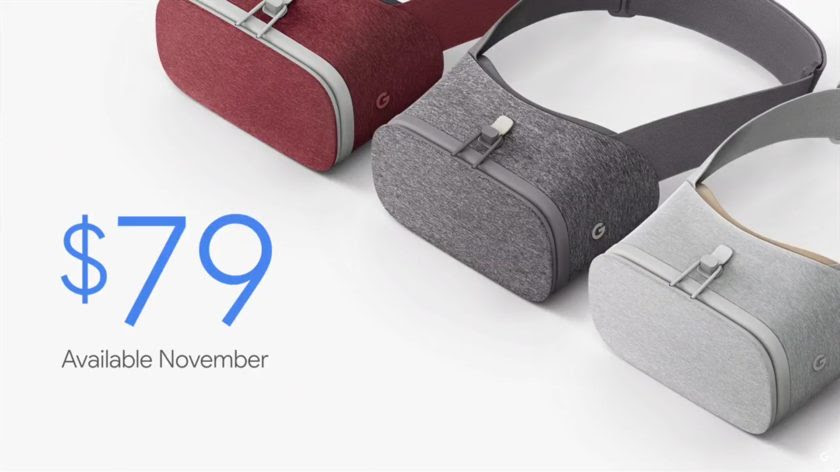 The first Daydream-ready smartphone on the market is Google’s new Pixel and the first headset for the platform is Daydream View, coming soon for $79.

Clay Bavor, head of VR at Google, presented the headset on stage at Google’s San Francisco event just a few minutes ago. Bavor said that VR is an important initiative for Google, as it enables visceral experiences that can change how we consume media and more. To make this possible, Daydream View features solid specs including a “good field of view” and low latency and accurate head tracking (when combined with Pixel), according to the executive.

Google also wanted to make Daydream View more comfortable and user friendly than existing VR headsets, so it used an unusual material to make it: textiles. The Daydream View is made of fabric and soft microfiber, the kind of materials you would see in athletic apparel and other clothing. That not only makes it more comfortable to use, but also lighter – up to 30% lighter than other headsets, according to Google. View also works with eyeglasses, said Bavor.