Product Description The SteelSeries 6Gv2, modeled after the award winning SteelSeries 7G keyboard, is the lower priced mechanical keyboard that improves the user’s ability to obtain more actions per minute... 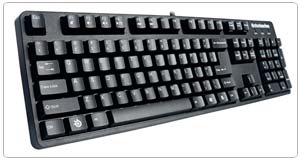 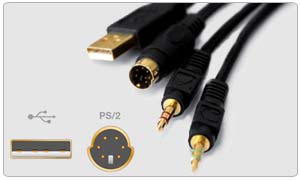 The SteelSeries 6Gv2 features PS/2 and gold-plated USB connectors as well as 18K gold-plated mechanical switches with a switch lifetime of 50 million operations, more than 10 times the lifespan of a typical "membrane" keyboard. Its increased response times and extreme durability make the SteelSeries 6Gv2 the ultimate keyboard option for gamers. 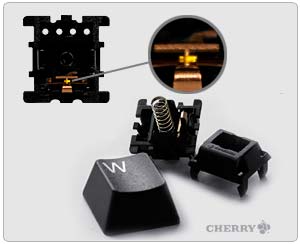 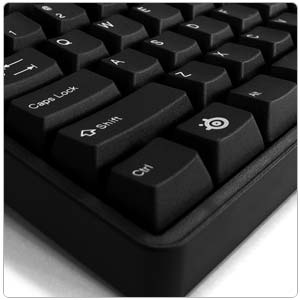 Ever tried pressing a few keys on your keyboard and getting a beep sound? It either happens when you press too many keys at the same time, or when you press too many keys within the same cluster at the same time (like the keys around WASD which often used for movements in games). If your keyboard exhibits this behavior it will hinder your ability to perform certain actions, movement in FPS games being one example. The industry calls this anti-ghosting. When using USB, you can use up to 6 keys plus modifiers at the same time, which is the highest spec limit a USB connection can accommodate.

It gets even better. With the 6Gv2 you don't have to press the keys all the way down for them to register. The mechanical switches will register key presses quickly with a travel distance roughly 50% shorter than a conventional keyboard. You will type faster, with a consistent tactile feeling. Your Actions Per Minute (APM) can reach new heights with the 6Gv2 thanks to this feature.

But the 6Gv2 offers more than just a long lifecycle. The rubber domes on a conventional keyboard will, over time, lose their tactile feeling due to rubber flexing. The keys you use the most will start to feel different. The physical construction of the mechanical switches used in the 6Gv2, and the strict tolerance levels in which the switches are manufactured, is what allows the key presses on this keyboard to always feel consistent.

SteelSeries 6Gv2 is built with mechanical no-click switches. The user's experience with mechanical switches is very different compared to using the "soft feel" keys found on conventional keyboards or even laptops. So how is it different?

Traditional keyboards are built with small rubber domes under the keys. It is these rubber domes that provide the "soft feel" level of resistance when you type. When you operate a rubber dome keyboard, the keys needs to be pressed down until a membrane switch is activated. These membrane switches will slowly wear out, typically after one to five million key presses. You may already have tried this. After a while you will find yourself pressing harder and harder to get the keyboard to register key presses. Typing gradually becomes annoying and irritating--but when you’re gaming and you start missing critical in-game commands, frustration sets in. The 6Gv2 offers a lifecycle of 50 million key presses per key, which is more than 10 times of the amount of a conventional keyboards.

It may take a while to get used to a mechanical keyboard. Most gamers or typists acclimate in approximately 1 to 2 weeks. Once you are properly acclimated you will appreciate better tactile feedback, superior response times and ultimately greater control. Simply put: You will become a better typist.

It's not just called "heavyweight" because it packs the best performance in the industry. The 6Gv2 is also physically heavy. All keys are mounted on a metal plate within the keyboard to ensure durability. The plastic material used to create the keyboard has metal elements, also to help to improve durability.

The 6Gv2 is built with a USB as standard, but also included is a USB to PS/2 adapter in the box. The choice is yours.

The PS/2 connector will give you total freedom with no limit to the amount of simultaneous key presses. And, equally as important, using the PS/2 may just improve your overall gaming experience. The reason is that when you use a USB keyboard your computer is actually using CPU time polling your keyboard. The higher the polling rate the more CPU time is used to perform the polling. And because of the built-in debounce rate found on any quality keyboard, any polling rate above 200Hz is simply a waste of CPU time and really just a result of pointless marketing hype. Unlike USB keyboards, a PS/2 keyboard isn't polled at all. The keyboard simply sends a signal to the computer as key presses are made, which causes a hardware interrupt, forcing the CPU to register the signal.

The Windows key is useful for certain things and in certain situations. But not in the middle of a gaming session. Replacing it on the 6Gv2 is a SteelSeries Key that won't wreak havoc during a gaming session by minimizing your game or by opening a menu. The SteelSeries Key serves a different purpose: it's a function key for the Media Controls found on the 6Gv2. You can press the SteelSeries key and access the Media Controls via the first six F-keys on the keyboard.

What's in the Box The Redragon K553A USAS isn’t your average gaming keyboard. Not only is it over-engineered and built to take a beating,...
389.00 MYR 169.00 MYR
Add to Wishlist
View product